Recently we posted that Feme became 10 years old and was a very fit lady. The last couple of days it could have turned out completely different. A couple of months ago when our vet came for the annual shots, we had our vet also have a look at our Feme. We thought she might have a cold. Our vet was convinced it was a polyp though and said, when her nose starts running or her ears get dirty, I will see you in the clinic. After about a month after the check she still had her cold and we decided to give her antibiotics. Fortunately Feme reacted very well on that and it confirmed us in our opinion that there was no way she had a polyp. She did very well for some time, but until last week. She started having a cold again. As she was still eating good and also performed her household task as policewoman we were not to worried until yesterday morning. Her cold increased a lot and she was short of breath and her tongue was a bit pale.

We decided to go to a vet, but not our own. Not long ago a pet hospital opened in Almere and we decided to go there because they are open in the weekend and have all kind of modern equipment which we already checked out on their open day.

Back to Feme. We arrived at the vet and after some time it was our turn. The vet had a look and after listening to the lungs and the discussion with us decided that it could not be a polyp but some respiratory problem. To decide what the problem was she wanted to make an X-ray. There was only one problem, Feme was so short of breath that she could not take the x-ray there and then. She said she wanted to put her on oxygen first.

So we had to leave Feme at the vet which we find very difficult, but the the cat comes first in our opinion. Later that day the vet called and said that Feme’s problem could be treated very well. It turned out she had bronchitis and an acute asthmatic attack.

She got treated with Ventolin, antibiotics and prednisone. She also wanted to keep her overnight to make sure she was  as optimal as possible . Today around noon we could pick her up again, she felt good and was walking around. When we entered she stepped in her basket straight away ;-).

Now she is walking around and enjoying a sunbath in the garden. It looks like she is feeling very well, but has to stay on prednisone for some time.

As you all can imagine it turned out to be a stressful weekend, we could very easily have lost Feme on Saturday and that because our vet was way off with her diagnosis.

Fortunately we found this vet (Nina is her name) and she acted very well, although it costs a couple of Euros as you can imagine ;-). But …… Feme is still with us and that is what counts.

Our thanks go therefore to pet hospital Almere  and specially to Nina.

Today exactly 10 years ago our Feme was born out of Dynamicats Banshee and Bonfires Cookie Monster.

In her younger days she did very well on shows and most likely she still would go well, certainly given her age. Unfortunately she only had 1 litter, but fortunately we kept her daughter Vaskebjorns Layla P. 😉

She is already sitting behind the door to receive all the birthday cards.

Yesterday was a happy day. Aswad (Bonfires Paint it Black) had his birthday and reached the age of 5. Unfortunately our cats are not allowed outside without a chaperone he was not able to buy a cake for all of us 😉

Today was a completely different story. Feme (Vaskebjorns Feme) had a doctors appointment, so we had to bring her this morning. The plan was to have her neutered. She is 9 years and 4 months old, so it was a good time for her. We also had her teeth checked. Everything went very well according to the vet and she is already home again and already feels a bit better.

As our Banshee is already very very old we decided to make a post here with 4 generations of cats. All 4 generations are living with us in our home.

As already said, Banshee is very old and you can see that in everything. She sleeps all day and you have to bring her her food. She can not be bothered anymore by walking over to the food and she likes to eat undisturbed by other cats. When a cat (or dog) are nearing their end we have a saying that says “Christmas is far away” and in Banshee’s case Christmas is very far away. 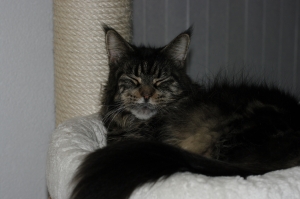 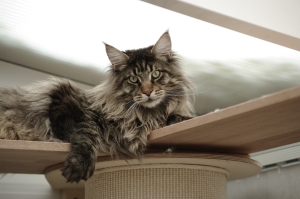 These three ladies are all still living at our place.

All the kittens are doing great and next month we will drive over to Vienna to have a look before they all go to their new houses.